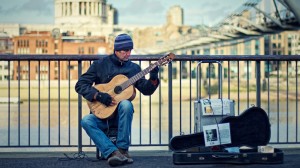 It has been observed that musicians are a more likely group of people to struggle with addiction problems. However, it does not usually start out this way. Substance abuse and a life of excess are usually introduced to the musician once they receive acclaim for their music.  When a musician starts out, it is almost always the same thing that universally motivates musicians to succeed: the love of music. A musicians love for music and need to create it is synonymous with their identity. It is this creative passion that leads them to the music industry, and interestingly, is also typically the thing that saves them from addiction and substance abuse.

Most musicians have next to nothing when they are starting out. Occasionally a strong musician comes from a musical dynasty and has relatives and connections in the industry, but much of what we consider musical genius actually evolves from street musicians, traveling musicians and those who had to work their way up through playing bars and small music venues. A number of these musicians thrive on this lifestyle and it feeds into their creative abilities. This is usually a humble, driven phase of a musician’s career; one that will define who they are as a person and as a musician.

For most musicians who face struggles with addiction and substance abuse, this phase of their career is clean. In the years of fighting to be heard professionally and writing from the heart, a majority of musicians are not abusing drugs, alcohol, sex or any other addictive substance or behavior. This is not the case with all musicians. Some have already discovered and begun to exploit their addictive tendencies. Some are just beginning to dabble in substances, using marijuana, alcohol and other easily accessible substances. But for most, this is a period of time that is devoted more purely to music than any other time in life.